Beatson the Master at Masterton & Arkins All the Way 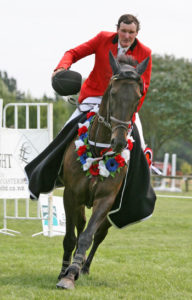 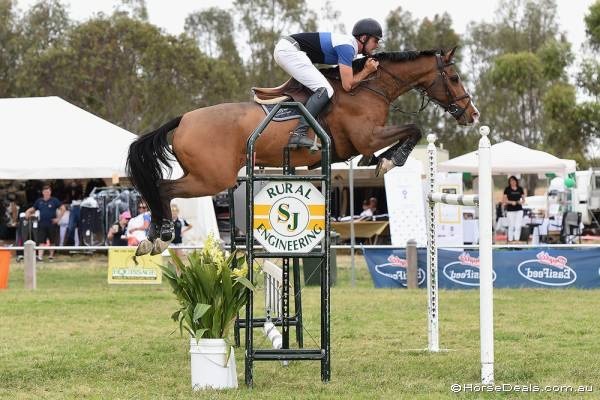 Maurice Beatson claimed the Equissage Horse Grand Prix as his own at the Masterton A and P Show today. The Olympian started three horses in the 14-strong class, and finished first, third and sixth. The jump-off came down to the Central Hawke’s Bay farmers – Beatson (Dannevirke) aboard Mandalay Cove and Simon Wilson (Waipukurau) on McMillan’s Midway Smooth Dude.
Beatson dropped a rail mid field, to finish on four faults in 57.33 seconds. The pressure was on Wilson to go clear, however, it wasn’t to be and had to concede the class. In the opening round, Beatson and Schimmel Warrior had four faults early on, and he also picked up four aboard Conyers, but in a slower time. In the Country TV Pony Grand Prix, Parys Marshall (New Plymouth) on Spot You Later, Ruby Mason (Napier) on Mr Acho and Sophie Scott (Pautatahanui) on Benrose Playtime were all double clear. However, Marshall’s 43.83 second time, just edged out her runner-up Mason who stopped the clock at 44.5, with Scott at 46.01. Fastest time of the round went to the fourth-placed Shanae McKay (Levin) on Guthrie who paid for her 38.73 round with a rail.

All Arkins Way at Woodhill
Aussie raider James Arkins is warming up for the Farmlands Horse of the Year Show in the best way possible . . . by winning. Aboard his New Zealand-bred Rosthwaite Vigilante II, he again headed home another Kiwi field, this time in the Excel Premier League Grand Prix at the Aon Insurance Premier Show at WoodhillSands in Auckland. He was the only one of the nine strong field to leave his slate clean in the two round competition. Coming in behind him were teen Emily Hayward-Morgan (Te Awamutu) aboard AP Ninja and Tash Brookes (Cambridge) on her former racehorse Kapattack. The women finished second equal and have both showed excellent in recent months. Earlier in the show Hayward-Morgan and AP Ninja won the Canterbury Equestrian Young Rider class and aboard her other horse Yandoo Lady Gold, she was second in the Telford Junior Rider class. In the Country TV Pony Grand Prix, Olivia Miller (Te Puke) and Kaycee McKay were the only double clears in the 15-strong field, three of whom came through to the jump-off. Pip Howells was the course designer for the two day show, which attracted 450-plus horses.