The woman who coined the term ‘kiwifruit’ has died in California at the age of 96.

The woman who coined the term ‘kiwifruit‘ has died in California at the age of 96.
Frieda Caplan became known as the Kiwi Queen after she came up with the term in 1962. She said the new name came about when a customer asked for Chinese gooseberries and when she saw them she thought they looked just like a kiwi bird and ‘kiwifruit’ would be a much more appealing name…. Than Chinese gooseberry. Frieda Caplan had encountered the fruit on a recent trip to New Zealand. It took nearly a decade for the fruit to become popular, which she referred to her 18-year overnight success. Ironically, she was allergic to the fruit. After hustling for years, working from 1 a.m. to 5 p.m. daily, Caplan founded her own company in 1962. Frieda’s Inc. became an industry leader, due to the health and fitness craze and medical reports stating that eating more fresh produce showed a lower cancer rate. By 2018, Frieda’s, Inc. was a $50-million-plus business with 75 full-time and 110 part-time employees and an 81,000-square-foot warehouse in California. 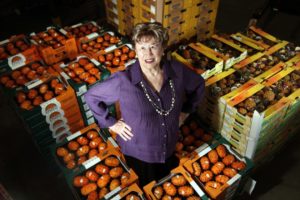